I would like to give my congratulation for the success (consider) of Utar Film Fest 2010, all the effort and hard work of the film fest commitee were shown through the event today. For me personally, I think the Film Fest has more room to improve in many aspects to review though I've no related experiences in this event, simply wanna express and share my thought about the event. 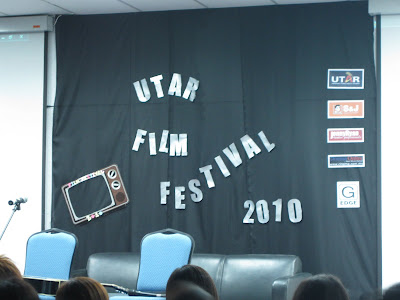 In generally was BORED and INCOMPLETE.
KENAPA?

The film fest was actually under my expectation and disappointing since the beginning. I've no idea why we've to queue for nearly 10 minutes just to get into the hall when the crowd is getting more and more... and it was because everyone has to leave their contanct information, signature, claim for the present .... created the traffic and somehow spoiled the good mood in nice dress. 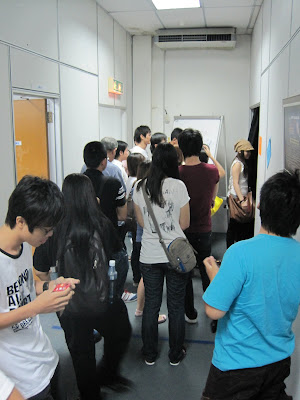 Alrite, the event starts from 11am with screening and some students works exhibition before we able to attend the talk shows of Director Chiu and Director Ho starts from 3pm.....  and the BIG thing is we've already watched their screening movie- The End of Day Break 心魔!  Somehow, I've watched most of our senior's works.... 4 hours more before I really can meet the directors, Whats that!!! If I've the programme flow with me day before how lovely would it be, aiks.

Is lunch break time and we still've to queue to about 10 minute waiting outside the room, HOT! Cant everything in more systematic and more efficient? Thats would be appreciate..... 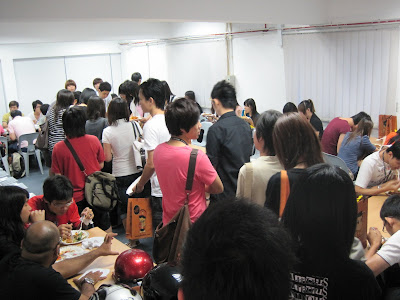 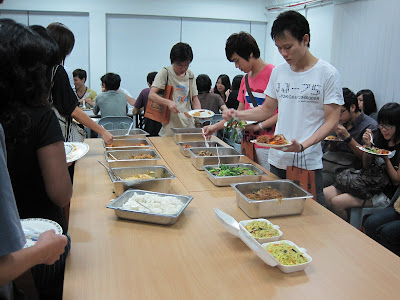 Vegetarian foods sponsored by Mr. Teddy Beh & Ms. Foo
in order to promote the vegetarian concept.
Finally, the event was officially launched at 2pm and.... the flow of programme was OFF & ON. The hosts of the event doesnt cooperate well with each other, seem like lacking of understanding without actual rehersal ( I guess). Host plays very important role whether they able to lead the entire programme into a better scenario or.... like today......
The hosts who interview Director Chiu at the first half of talk show was DISASTER asking " not interested" and irrelevant question which keeps the crowd leaving, BORED! Aduh.... Though they're speaking chinese but in broken and hardly understand. Female host performs better than her partenr but she sounds like doin debating rather than a casual interview. In the second half of the shows interviewing Director Ho, the hosts performs MUCH MORE better than the previous section. Thanks about that when my frens were all left earlier before. The male host is doing a better job than the lady probably he has experiences in several event in University before, stable and cool. The female host was quite rude in manner as she kepts cut into the conversation of people before their able to finish their line.
Cherrie was right and I like her idea that if the awards presenter able to briefly explain whats the requirement or suggestion for the contestant before giving away the prizes. Oh, hope they will remember to play the nomination's video clip before they invite the presenter to the stage and STANDING there.....
It would be definitely make the event smoother Lovelier....... 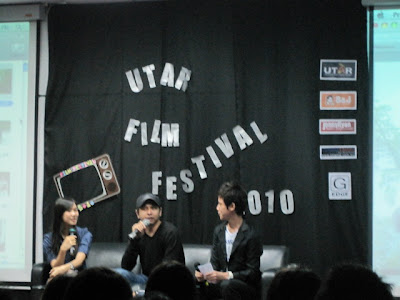 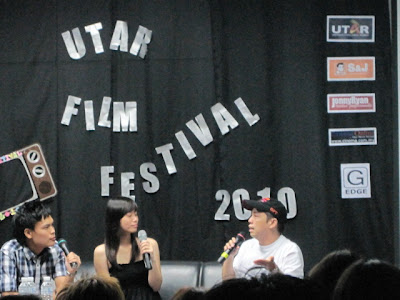 Talk Show with Director Ho Yu Hang of The End of Day Break.
The talk show with director Chiu was awful, thank to the hosts for the sucks questions. On the other hand, the talk shows with Director Ho Yu Hang is much more inspiring, at least for me. The 1st impression when I saw him last time (In Utar as well), he outlook apperance was so casual and " common" just like another uncle walking in the pasar malam but today he really IMPRESSED me. Either his way of YuHang's thought about the industry or his kind of F*** humour, so real and THAT real. The audience was entertained and applaused for him, everyone enjoyed the time together with him.What's really inspired me from director Ho about he said today~
" If you wanna know how the beer is, Taste it. "
I'm quite agree with what he said in certain extend about the creativity. According to him, why do you wan to come out with the script which people already can tell the ending either yourself ? He gives credit to a french scrip writer who writes follows his feeling and whats come to his mind wihout set himself a limit as he has no idea whats the ending would be too..... Think about it, I Like.
He also unveiled the realistic faces of movie industry and " gov obstacles" to conquer currently in Malaysia Broadcasting industry. The truth was so mean and cruel for the people who really has the passion in the movie industry, for the Malaysia make movie. He urged to VOTE for the changes instead of SAY ONLY.....
.... I've no doubt about the ability of Utar Fim Fest Comitee and all the hard works puts in as I understand it wasnt really easy to organise an event which has already prepared for 2 months+ .... Please do no take my opinion and comment personally no matter anyone of you, I'm talking about the UTAR FILM FEST, alrite? Hope you understand this is just the sharing of my thought and feel free to leave me comment if you think whatever I said wasnt true or anything to say, Say It Loud! (dont f*** me, okay?)
.... Is Netherland Vs Japan tonight,
GOAL! Netherland! LOL .....

Email ThisBlogThis!Share to TwitterShare to FacebookShare to Pinterest
Labels: Art and Performance